The following report will review excerpts of the video. Click here to view the video on MEMRI TV. 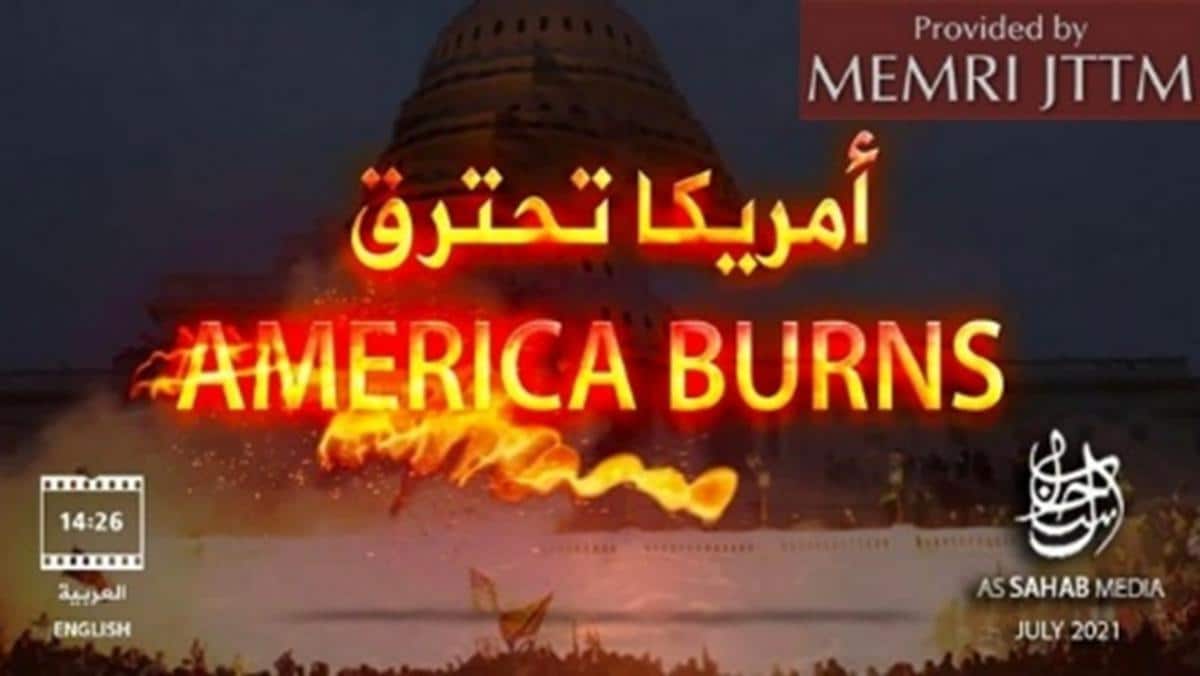 "Corona, Divisions, Racism, A Declining Economy, And Strikes By The Mujahideen – The Five Cornerstones Of America's Coffin"

The events mentioned in the video seem to have occurred no later than March 2021 and certainly not after April 14, 2021, when Issue Five of Ummah Wahidah was published. The video argues that the U.S. is on the verge of collapse, asserting that the "five cornerstones of America's coffin" are the COVID-19 pandemic, a declining economy, racism and resulting tensions between blacks and whites, sharp internal political divisions, and ongoing attacks by Al-Qaeda. 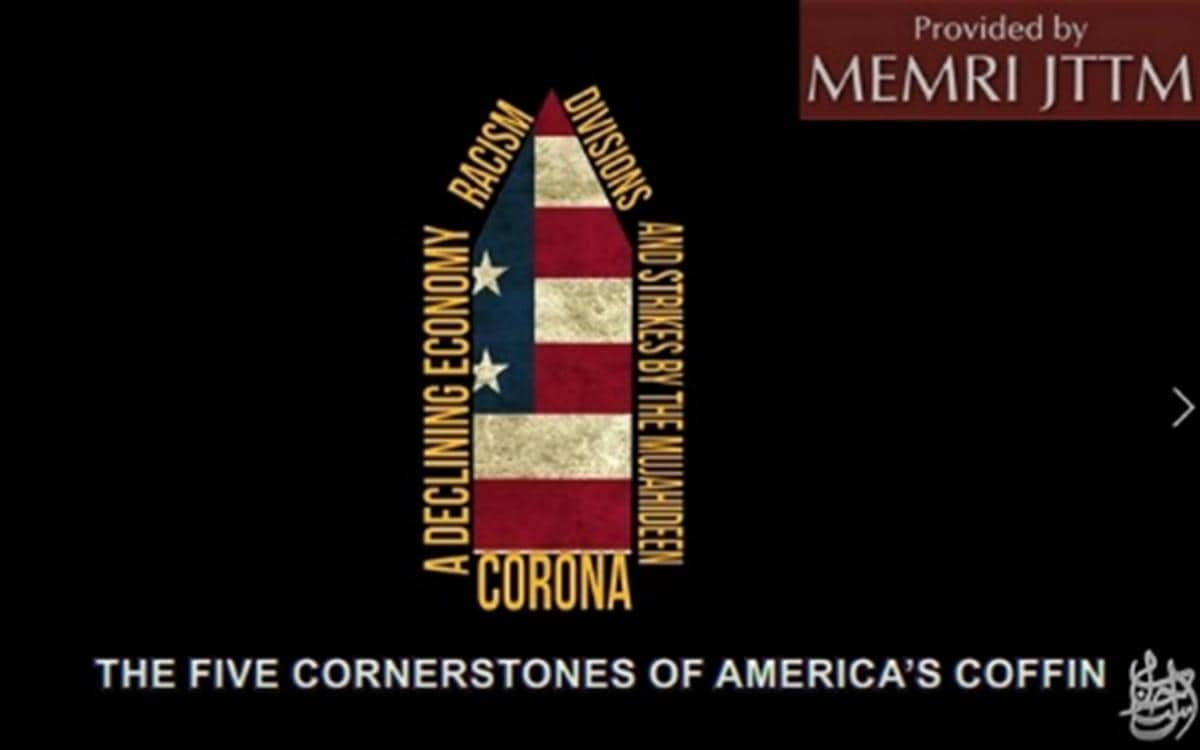 COVID-19 And The "Decline Not Just Of The American Economy But The Entire Capitalist Economy," "A Usury-Based Economy, An Inflated Balloon Waiting To Implode"

Referring to COVID-19, the video states that "an invisible soldier, corona, penetrates the decaying American polity." The pandemic led, according to the video, to the loss of millions of jobs, the closing of hundreds of thousands of businesses, and made "more than 30 million Americans suffer from food shortages."

Claiming that the economic losses caused by the pandemic "threaten the very existence of America" and indicate the decline of "the entire capitalist economy," the video says that the U.S. government responded to the economic crisis with actions that help the rich get richer while the poor remain in poverty. The video adds that Allah "decided to punish America with an even more savage torment," sending severe weather during the winter, "freezing water supplies and cutting off electricity for millions," so that Americans lined up in "mile-long queues in the quest for potable water and food to stave off their hunger."

The video discusses the January 6 riot at the Capitol, whose participants it referred to as "The Raiders of the Congress. The evangelist terrorist extremist followers of the Trump cult." The video said: "These are the same people that Biden labels 'homegrown terrorists.' Things reached a point where Schumer demanded the imposition of travel bans to Washington, not on those arriving from Yemen or North Korea, but from Texas and Florida." 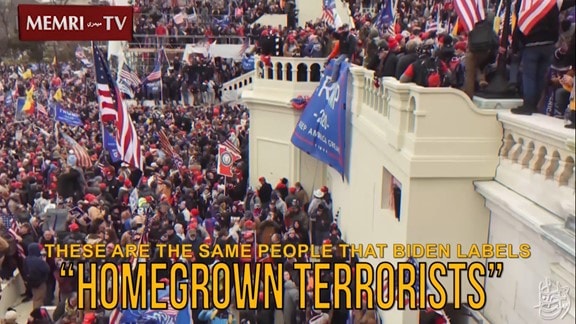 Mocking the U.S. government response to the riot, the video says: "Pelosi ordered the creation of a commission to investigate the events of the 6th of January like the 9-11 commission. So, will this be followed by the opening of a new 'Guantanamo' for Trump's terrorists? And the invention of new spying techniques targeting Americans like the 'Wind Stellar' program. Perhaps things will end at the use of EIT 'Enhanced Interrogation Techniques' such as waterboarding and sleep deprivation to force Trump's terrorists to disclose their plans for the next attack on the Congress and perhaps the White House. Maybe Biden would use his weapon of choice, drones, to assassinate 'high value targets' hiding in the deserts of Texas or the beaches of Florida. These 'HVTs' would be none other than the supporters of Trump who 'terrorized' the members of congress, and forced them to hide like scared rats, a scene which surely pleased Trump." 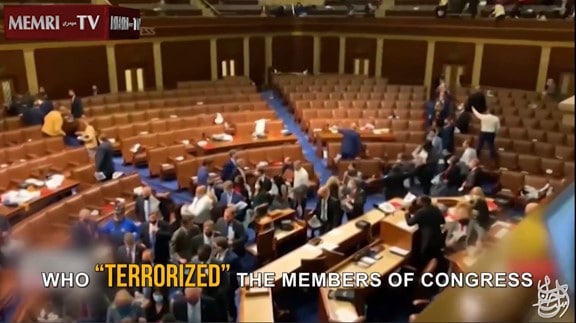 "His revenge of the day when he was forced to hide in the White House out of fear of an attack by the supporters of Pelosi who had no qualms gloating over Trump's misfortunes... As for the liberal media, it launched its attacks on the Daesh of Washington and on their leader and chief instigator the former American president, Trump, who behaved as if he was a member of Daesh." 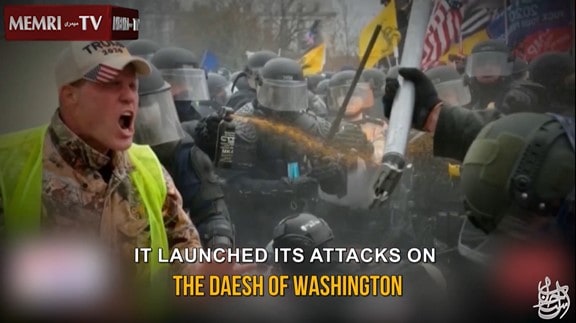 The video recommends that staff at U.S. media outlets get training from Al-Jazeera and refers to Ashli Babbit, who was reportedly shot by security personnel inside the Capitol on January 6, as a "Kharijite[6]": "The producers of the shows aired on these channels need to attend training sessions @ Al Jazeera & Al Arabiya in the art of distorting the image of 'terrorists' and projecting them as the embodiment of the devil. The victims of the 'war on terror' in Washington reached five dead among them a woman, a homegrown terrorist or a 'Kharijite' from the 'Khwarij of the contemporary era.' It later transpired that she was a fighter pilot in the US Air Force! The Department of Defense launched a 'background check' program to sift out terrorists from the armed forces." 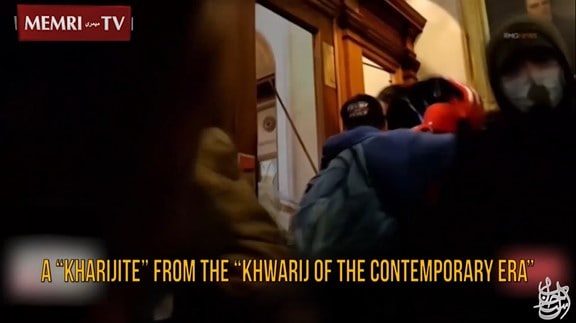 Video Anticipates Civil War In U.S.: "The Drumbeats Of Impending Civil War Can Clearly Be Heard... And It Shall Be A Civil War That Marks Its Ultimate Doom"

Discussing January 6 generally and the unrest in the U.S., the video says: "The events of the 6th of January exposed the fragility of the Democratic system. The strongest fortress of democracy in the world was on the verge of falling as a result of an attack by a few thousand demonstrators." 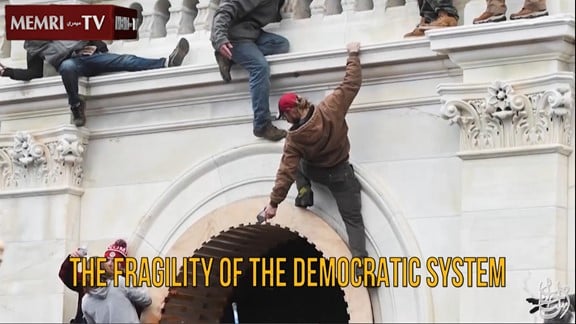 "Had it not been for the intervention of black policemen who confronted the attackers and dislodged them from the hideout of the members of congress, the world would have witnessed a blood bath. Pelosi, Schumer, Adam Schiff, and perhaps, the 'traitor,' the vice President Pence who refused to intervene to impede Biden's victory, would have all been hanged on gallows erected in the lawns of the Congress." 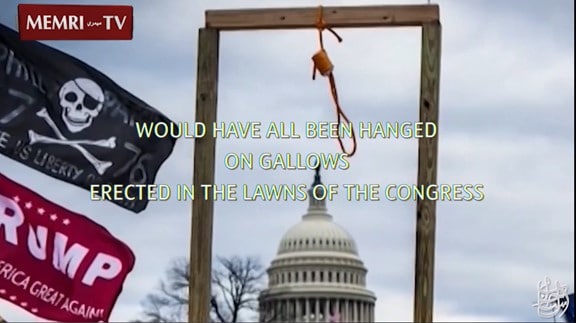 "It was Allah's wisdom that the fourth plane whose downing was ordered by Dick Cheney on the 11th of September did not reach its target, and Americans were left to destroy the edifice of their democracy with their own hands..." 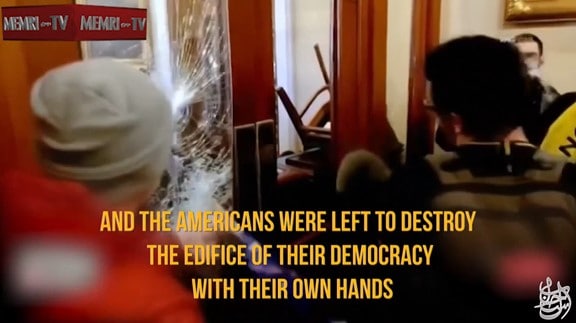 "The purchase of weapons spiked last year in America, reaching unprecedented levels not witnessed in decades. The drumbeats of impending civil war can clearly be heard. It was a civil war that brought the mother of all evils into existence, and it shall be a civil war that marks its ultimate doom. In fact, the commencement of this civil war has just been announced by none other than Biden himself in his inauguration speech when he called it an 'uncivil war...'"

Stoking the same divisions it identifies as one of the "cornerstones of America's coffin," the video comments on the killing of George Floyd and the resulting Black Lives Matter (BLM) protests, saying: "When it comes to racism and the spread of the ideology of white supremacy, we can never forget the scene of four white policemen strangulating a black man to death as he shouted: 'Let me breathe.' The poor fellow had perhaps forgotten all that the white supremacists had done to his forefathers and so black America rose up in rebellion over the killing of George Floyd..."

"The streets of America overflowed with everyone unsatisfied with the situation. Black and white, racist extremists, leftist radicals, the hungry, the needy. Arsons became commonplace. Stores were robbed. Highways shut down. A curfew was announced, and the army came out on the streets."

The video goes on: "Soon, the Republicans will raise the slogan: 'White lives matter'! In a futile attempt to mimic the slogan 'Black Lives Matter'!" 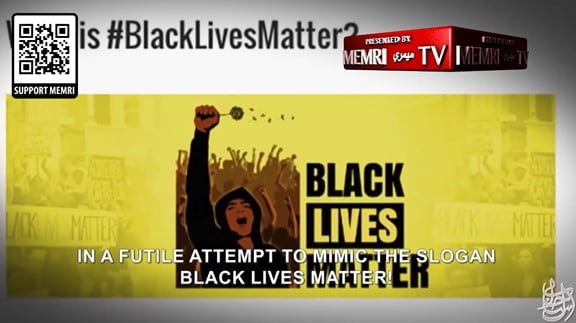 Claiming racism pervades U.S. society, the video asserts that "black America rose up in rebellion over the killing of George Floyd" at the hands of a white policeman in May 2020, and subsequently all unsatisfied Americans took to the streets, including "racist extremists, leftist radicals" and the poor. The video notes the riots and looting that ensued and that then-president Trump "came out of hiding to threaten his own people" with a harsh crackdown. According to the video, white Americans saw Trump as their "savior and brave liberator" who had announced "the commencement of the war for America's liberation from the 'extremist, leftist radicals.'" 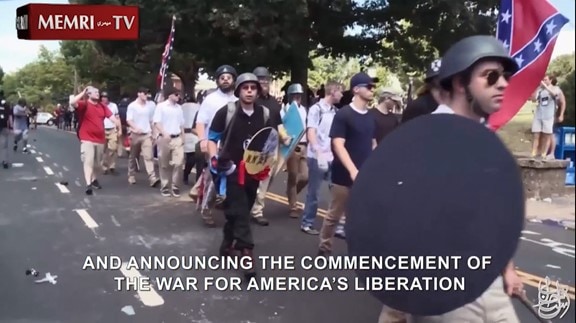 The video recommended that Trump supporters read Al-Qaeda's Inspire magazine: "Trump invited his supporters to search for new platforms for communication to bypass the censorship imposed on them by the big guns of the social media world who are known for their Democratic leanings. Trump's supporters might find it useful to benefit from the mujahideen's experience of bypassing censorship. They will find what they need in the Inspire magazine issued by the Mujahideen in the Arabian Peninsula." Video Suggests That President Biden May Be Assassinated 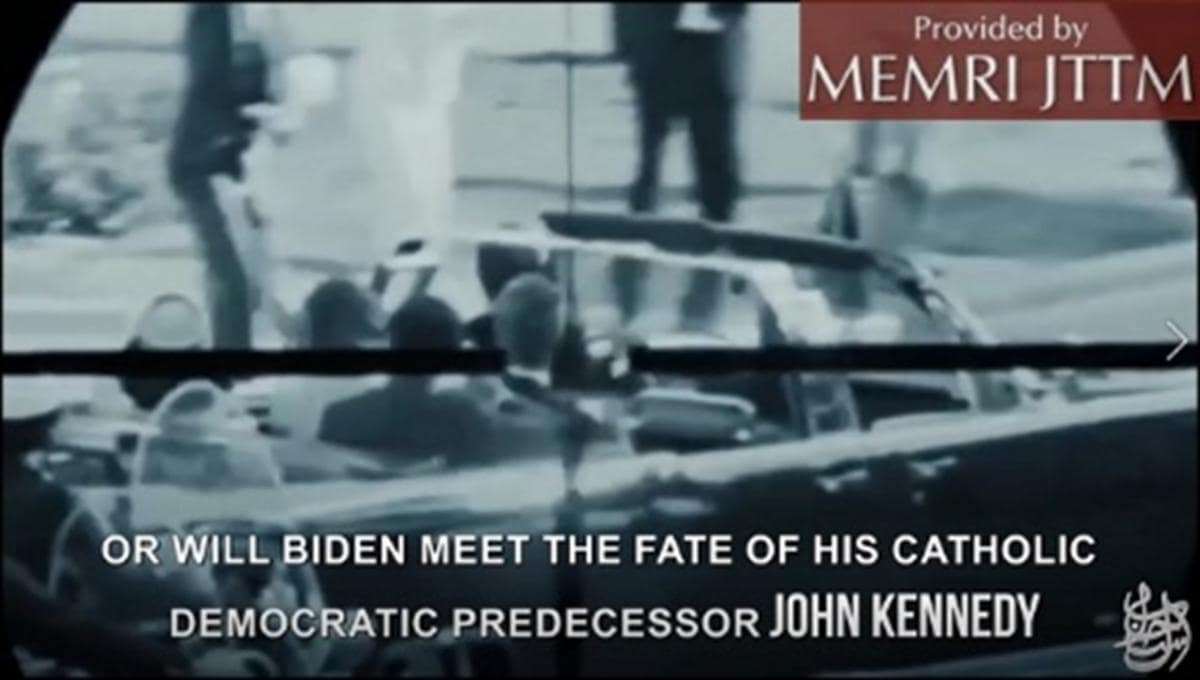 The video concludes with footage from a May 2007 video featuring Al-Qaeda's current leader Ayman Al-Zawahiri, in which he said: "I tell the blacks in America, the people of color, the red Indians, the Spanish and all the oppressed in North America, in South America, in Asia, in Africa and in the entire world that they should know that when we fight in the way of Allah, we do not fight to end the oppression of Muslims alone. We fight to lift oppression from mankind in its entirety. I invite the oppressed of the world to Islam. The religious freedom and rejection of injustice. This is the religion that destroyed the Caesars and oppressive kings of the world. To the soldiers of color in the American army I say: The racist crusader system kidnapped your forefathers to ensure the continued increase of their own wealth. Today, they exploit you for the same end. They only changed the type of handcuffs and chains they use to enslave." The video includes an audio recording of a 1964 speech by Malcolm X, in which he said: "No, I'm not an American. I'm one of the 22 million black people who are the victims of Americanism, one of the 22 million black people who are the victims of democracy… I don't see any American dream, I see an American nightmare." Showing scenes of coronavirus victims, poor Americans, riots, unrest, and U.S. aircraft destroyed by mujahideen, the video ends by repeating three times the words: "I see an American nightmare."