Al-Qaeda's Central Command: The Defeat Of The U.S. In Afghanistan Has Put An End To America's Appetite For Invading Muslim Nations
MEMRI - Middle East Research Institute 11:00 07.09.2021 2 months ago

Al-Qaeda's central media wing, Al-Sahab, released a statement congratulating the Islamic Emirate of Afghanistan, or the Taliban, on the complete withdrawal of U.S. forces from the country, claiming that this "victory" has put an end to U.S. military intervention in Muslim countries.

The statement, which was released in Arabic and English, paid tribute to several Taliban leaders for their role in leading the jihad against the U.S.-led coalition and called on the Afghan people to show support for their new leadership.

The statement began by praising Allah for granting victory to His servants and defeating their enemies and for allowing the Quran to be recited inside the presidential palace in Kabul.

"Praise to the one who soothed our hearts with the recitation of the noble Quran from inside the palaces of Kabul after it was cleansed from the filth of the Americans," said the statement.

It further thanked Allah for "humiliating America, the head of unbelief," perceiving its withdrawal from Afghanistan as a "defeat that broke its back, lowered its flags, and tarnished its global reputation."

It added: "Congratulations to the Muslim nation for this historical victory, which was authored by Allah the Almighty, through the hands of the patient Afghan jihadi ummah, which defeated the invading empires, finally expelling them from Muslim lands."

Praising Afghan jihadis for their sacrifices in souls and money, and for their steadfastness throughout decades of war, the statement paid special tribute to Taliban leader Hibatullah Akhundzada.

"We congratulate the Afghan ummah on this great victory over the Crusaders' coalition and we congratulate the leadership of the Islamic Emirate, led by the Emir of The Believers, [...] Hibatullah Akhundzada, may Allah protect him."

The statement prayed for Allah to accept as martyrs the men and women who were killed during the struggle to attain this victory, naming some of the Taliban slain senior leaders including Mullah Omar, Akhtar Mansour, and Jalal Al-Din Haqqani.

Addressing Muslims, the statement underlined that the victory in Afghanistan is a lesson that highlights the strength of the Islamic nation when it unites in the effort to defend its religion, honor, land, and resources.

It further called on Muslims to pursue the path of jihad, saying this will pave the way for victory and empowerment, regardless of the size of the enemy's troops or its military power.

Speaking about the next chapter of jihad, the statement told Muslims to remain alert, because the victory in Afghanistan will open the door for all Muslim nations to liberate themselves from the rule of tyranny, as well as facilitating the liberation of Palestine from the "Zionist occupation." The statement argued that "rubbing the noses of the U.S. and NATO in the mud of Afghanistan has put an end to American and European arrogance, and to their greed in militarily invading Muslim nations."

It also noted that the U.S. withdrawal from Afghanistan provides an opportunity for people in Europe and east Asia "to get rid of American hegemony."

The statement concluded by extending further congratulations to the Afghan people, calling on them to show support for their new leadership and to abide by its decisions and laws.

It then prayed to Allah to help the mujahideen in Palestine to get rid of the "Zionists," to liberate the Islamic Maghreb (North Africa) from the "French occupation," and to liberate Syria, Yemen, Somalia and Kashmir, just as He liberated Afghanistan. [1] 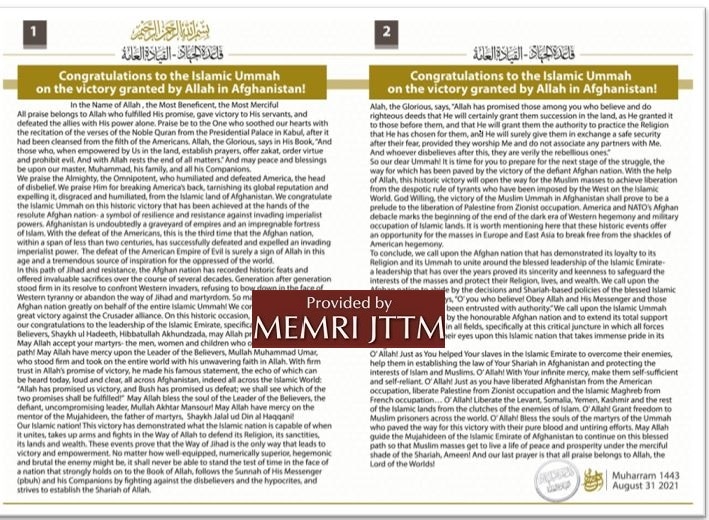 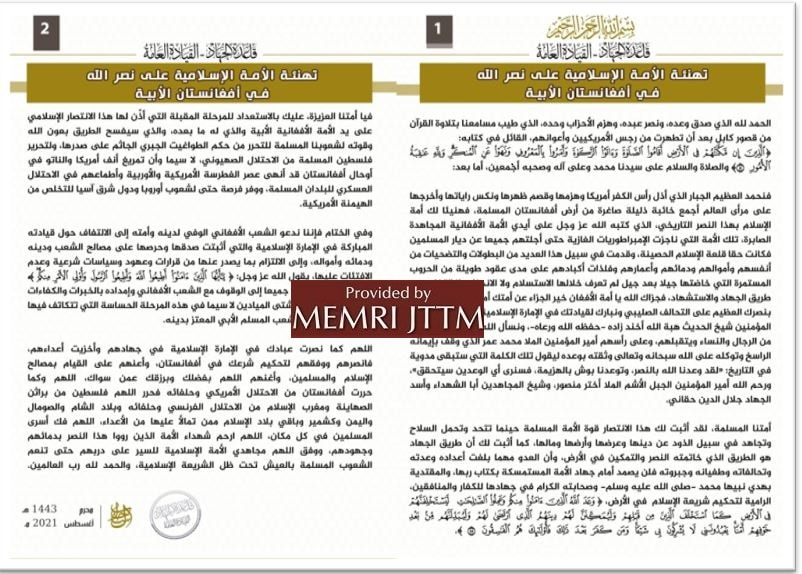