Across the globe, there are dozens of American enclaves, but Captain (N) Katie Sheldon's office at the Kirya base in Tel Aviv is probably one of the smallest. The Azrieli Towers can be seen from residents’ windows, where local residents can be heard speaking Hebrew, but it all stops at her door. Inside Captain Katie Sheldon’s office, the officers wear United States military uniforms with symbols foreign to the Israeli eye and English being the language of discourse.

A few months ago, Israel moved from the area of ??the European Command of the United States (EUCOM) to the area of ??the United States Central Command (CENTCOM), in order to enable wider cooperation between nations in the Middle East. The Commander of the U.S. Naval Forces Central Command, Vice Admiral Brad Cooper, appointed Captain Katie Sheldon as his liaison officer in Israel due to her extensive and varied experience in the US Navy, and NAVCENT in particular. 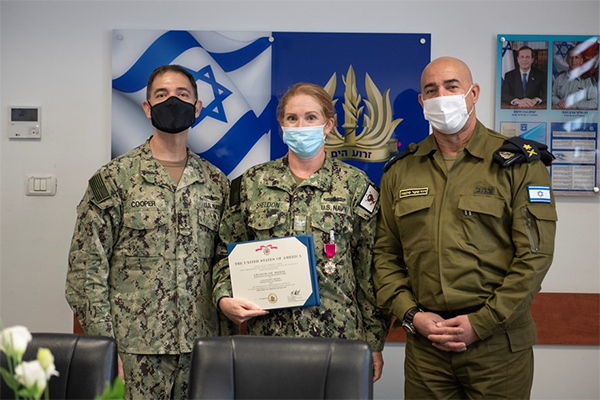 “I was selected for the position of liaison officer to NAVCENT thanks to my extensive knowledge of the NAVCENT area of operations, the various forces supporting the command and U.S. Fifth Fleet. I have worked with Vice Admiral Cooper in the past and I know his intentions to deepen U.S. Navy ties with Israel” says Captain Sheldon.

Since taking office, Captain Sheldon has laid the foundations for the connection being built between the Israeli Navy and U.S. Fifth Fleet.  About her role as the liaison officer, she says, "The role of the liaison officer is extremely important. There is a huge responsibility here - sitting here I represent U.S. Fifth Fleet, Vice Admiral Cooper and the whole team. The weight of responsibility can be daunting, but luckily I have the full backing of my leadership and teammates. My role as a liaison officer is to assist in coordinating the cooperation between our two navies".

“For decades, a close alliance has existed between Israel and the United States, but in recent years, the maritime partnership between the two nations has been rising and reaching new heights. It would take too much time to detail how much the two countries benefit from this partnership," explains Captain Sheldon. “This alliance has allowed us to expand our shared understanding of the maritime environment.

“The alliance between Israel and the United States is built on mutual respect and continuous communication. This is exactly why the role of a liaison officer is so important, it allows us to strengthen and expand the We have recently been able to significantly deepen the connection between the U.S. Fifth Fleet and the Israeli Navy”. 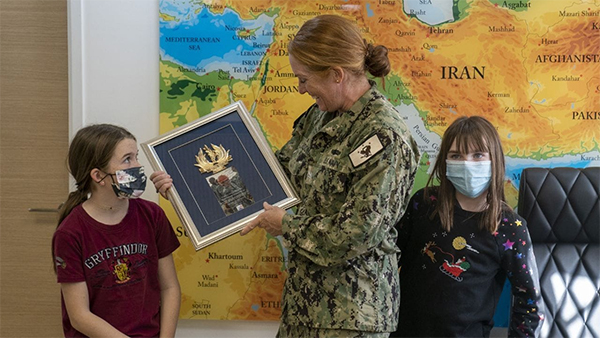 Captain Sheldon has served for over 20 years in the United States Navy, and as part of her duties, she has visited all corners of the globe. But as her time in Israel draws to a close, she views her time here as one of the most special and interesting experiences she has ever had.  "Over the years, I have served on three ships and been sent on missions all over the world - from Korea to the Pacific. I feel lucky to have served here in Israel and fulfill this role”.

When asked about one significant moment from her time in Israel, Captain Sheldon had a definite answer: "A significant memory I have is a helicopter tour I had in July, shortly after I arrived in the country. It was my first chance to see the State of Israel. Seeing not only the beautiful landscapes of Israel, but also the challenges it faces on a daily basis, and how they differ from the national challenges of the United States was extremely moving. This moment when I saw the State of Israel from above gave me a real perspective on the day-to-day struggles that it faces”.